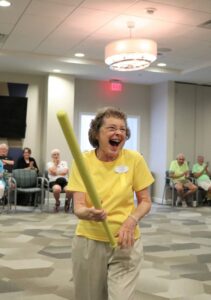 Athletes from around the globe took part in the Summer Olympics in Tokyo, but in Richmond, the competition was fierce for the inaugural Lakewood Summer Games in July. Lakewood’s entire resident population was divided into countries and competed in various events July 12–16.

As part of the games, each team accepted donations which ultimately totaled more than $3,500. The community donated proceeds from the event to the Special Olympics.

The weeklong event concluded with closing ceremonies and medal presentations. The gold medal and a celebratory party went to the members of Team Dominican Republic. Team England took home the silver medal and Team Brazil came in third to take the bronze medal podium.

This story was originally published in LifeSpire of Virginia’s 2021 Annual Report. The full digital magazine is available online.

To learn more about living or working at Lakewood or to schedule a tour of our beautiful Life Plan Community, please fill out the request form.

This is for testing purposes